6 Best Places To Visit In Perugia (With Photos & Map)

5 years ago 7.2 K
Best Places To See In Perugia:
6. Etruscan Well
5. The Oratory of San Bernardino
4. Rocca Paolina
3. The National Gallery of Umbria
2. The Cathedral of San Lorenzo
1. Fontana Maggiore in Perugia

Perugia, the capital of the Umbria region in Italy, has typical alleys, stupendous churches, majestic palaces and a millenarian history. It’s a little jewel which slowly shows its beauties to the visitors, allowing them to discover all its charm.

Perugia keeps artistic and monumental treasures which testify the rich past and the cultural importance of Italy. Even if it preserves the appearances and the rhythm of life of a little medieval village, Perugia has a very intensive city life that is linked to the presence of one of the oldest Italian universities (the University of Perugia was founded in 1308) and to one of the best University for Foreigners in Italy. Perugia is not a “city museum” and this is not the kind of city full of tourists during the day and completely empty during the night, but a city that deserves something more than a quick one day visit.

From the National Gallery to the Etruscan Palace, from San Berdardino Oratory to the Corso Vannucci, here we want to suggest you 6 best places to visit in Perugia. The rest is up to you.

The Etruscan Well In Perugia is a great work of hydraulic engineering and testify the technical knowledge and the civic degree that the Etruscan population had 300 years before Christ. Its construction is dated back in IV or III century BC, but even if the date is uncertain, the dimensions of this well are sure: 37 meters deep and 5 meters diameter. A great construction which served as water barrel: here flowed into three water-bearing stratum of Perugia.

The well is practicable thanks to some stairs which allow the visitor to reach its deepest point. The bottom of the well is covered of travertine, the same material has been used also for the covering of the well. If you pass in Piazza Danti, don’t forget to visit this incredible work of hydraulic engineering.

Information to visit the Etruscan Well:

The Oratory of San Bernardino was wanted by the Franciscan in honour of San Bernardino from Siena, indeed his preaching fascinated Perugia’s city dweller several times. The beautiful polychromatic façade was made by Agostino di Duccio, who used various materials and was able to create a real colour symphony which explodes in a charming reflex game. Agostino di Duccio succeed in glorifying the Saint and in telling about the saint’s miracles with an elegant stone and marble embroidery. This work is the highest expression of the Perugia’s Renaissance.

A double door is the entrance of this church which has a beautiful Gothic interior and the altar is a pre-Christian sarcophagus dated back to the IV century, which keeps the mortal remains of the Blessed Egidio, friend of San Francesco. Behind the altar there is an other door which gives into the Saint Andrew Oratory, which has a painted coffered ceiling dated back between the XVIII and XIX century.

Information to visit the The Oratory of San Bernardino: 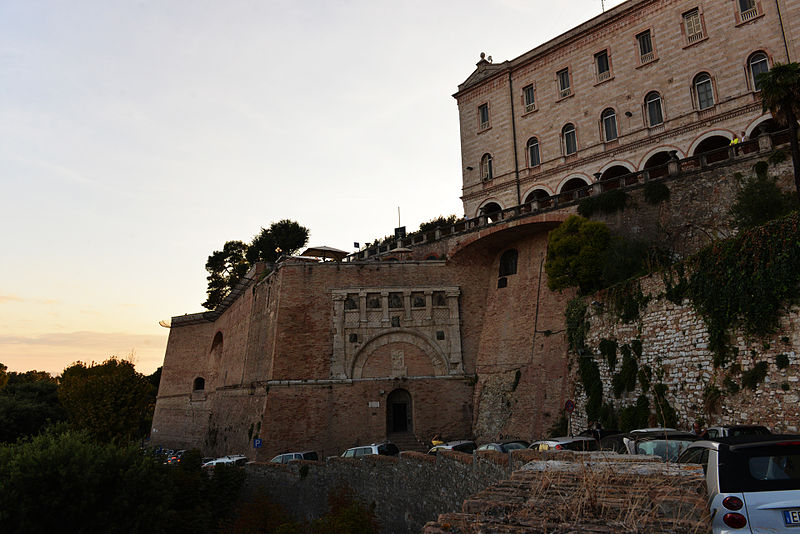 This post has been extolled from celebrated Italian poets, the Rocca Paolina (Paolina stronghold) was asked to be built by the Pope Paolo III and realized by Antonio da Sangallo the young. The intentions of the Pope, who was still impressed by the episode of the pillage of Rome, were those to make the city safe and to create an efficient refuge as Castel Sant’Angelo was.

To build this fortified tower more than one hundred houses, monasteries and churches were destroyed, especially the ones which were properties of the Baglioni family. This family was very hated by Paolo III. The Rocca was symbol of pope authority up to 1860, in this year the tower was pulled down after the annexation of the region with the Italy reign.

There are still visible a part of the walls of this tower and the bastion of Porta Marzia (Marzia door). But the most interesting part of this Rocca are the underground, in particular the escalator that from the parking, which is situated in Piazza Partigiani, run through the Rocca under the lateral door of the Palazzo del Governo (from 1870 it’s the seat of the Region government) and arrives in Piazza Italia. In this unique scenario there are shops, boutiques, bookshops and take place cultural manifestation.

3. The National Gallery of Umbria (Galleria Nazionale dell’Umbria) in Perugia

The National Gallery of Umbria has its seat in the Palazzo dei Priori, which is in Corso Vannucci. Its foundation is dated back in 1878 and it has the richest and the most complete artistic patrimony in all the region.
The works here kept covers a period that goes from XIII to the XIX century and they are organized under a chronological path: at the third floor there are the works dated back from the XIII to the XV century, and at the second floor the works dated back from XVI to the XIX century.

The big difference between this museum and other museums consist in the fact that in this gallery the works are kept in a little space, so they follow one an other without breaks. You can admire in one sight all the Virgins and the politician represented by the Florentine painting in 1400, the masterpiece of the Renaissance and the unique pieces of Umbria goldsmith art.

Among all these works stand out the Duccio Buoninsegna, Piero della Francesca, Beato Angelico, Pinturicchio and Perugino ones. Furthermore there are specific collection dedicated to the goldsmith art, to the ancient graphic, to the topography and to the Umbria tissues.

Information to visit the National Gallery of Umbria:

The works to build the Cathedral titled to San Lorenzo, one of the saint patrons of the city, began in 1345 and ended in 1490. Both the lateral part and the principal façade are still incomplete. The lateral part gives onto the Main Fountain, and a geometric texture of pink and white marble rhombus decorate the inferior part. The main façade gives onto Piazza Danti (Danti Square) and it’s characterized by a baroque style main door, dated back in 1729.

The interior, which is in late Gothic style, has three naves of the same highness, divided by big pylons. The decorations were finished in XVIII century and, among these, the most important are a “deposition” by Federico Barocci, the stained glass window dated back in XVI century, by Arrigo Fiammingo, and the funerary monument in honour of the bishop Andrea Baglioni realized by Urbano da Cortona. In the cloister you can admire the Museo Capitolare, that keeps important art works.

Information to visit the Cathedral of San Lorenzo: 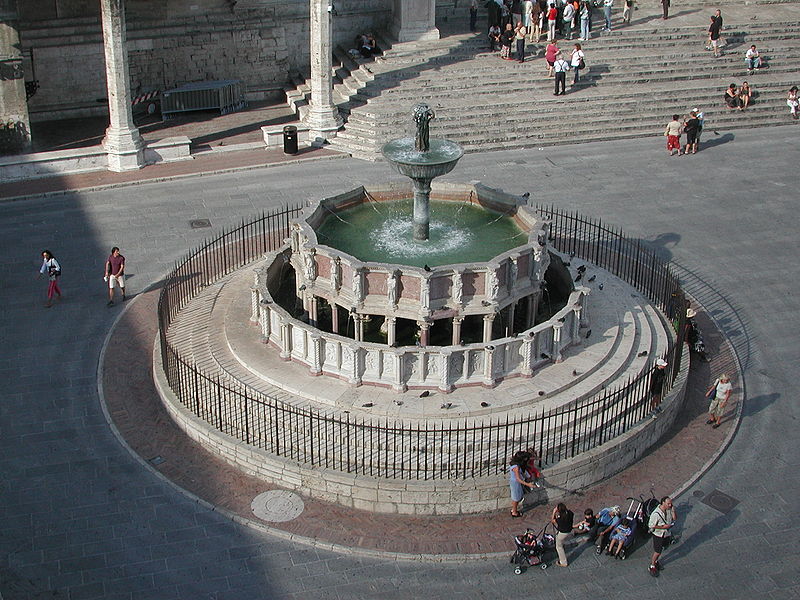 At the centre of IV Novembre square rise the stupendous fountain, Fontana Maggiore, one of the most celebrated in Italy and a real symbol of Perugia of the medieval age. The Fontana maggiore (Main Fountain) was built between 1275 and 1278, on a project of Nicola and Giovanni Pisano, it was supposed to receive the waters coming from the Mount Pacciano aqueduct.

The two artists wanted this fountain to be built on a round stairway, composed of two basins: one of pink stone and an other of white stone, the two surmounted by a bronze bowl. From this bowl you can see emerge three nymphs whom hold up an amphora from which the water spread out.

The superior basin lean on little columns on which rise statues representing the mythic characters linked with the mythic history of the foundation of the city. The inferior basin it’s decorated with fifty bas-reliefs representing the agriculture works, and some Byble episodes, historical and mythological, the two symbols of the city (the gryphon), of the guelf party (the lion) and of the Empire (the eagle).

Then the representation of the seven liberal arts and of the philosophy. It’s strange the presence of two bas-reliefs representing images taken from the Esopo’s tales (the crane and the wolf; the wolf and the lamb).

The fountain has been recently restored, and now you can admire it in all its splendour.

Information to visit the Fontana Maggiore:

6 Best Places To Visit In Perugia (With Photos & Map)